A few, hopefully accurate, recollections from my period in the group 1956-1958.

On a shelf in my garden shed is a six inch blade, fifty-five year old, sheath-knife. I find many uses for it from weeding to whittling. The blade, though still kept sharp, is pock marked and worn, the handle has lost some of its leather. Like its owner it has seen better days. Some of its best days were the 1957 Summer Camp at Fittleworth, Sussex and the three day wide game in the New Forest around Fawley when I was a member of the Senior Patrol in the 2nd Portsmouth [Southern Grammar] Scout Group.

For their regular meetings the Group assembled on Friday nights in the school gym, the Junior Patrol early evening and the Seniors at 1900. Our skipper was Dennis ? [I think he taught Biology but was never my teacher] who had the special skill of dropping the 'teacher' and becoming a 'Skip' in the best traditions of Scouting. We did all the usual work towards attaining our badges which occasionally included Widegames on the field and along the edge of Langstone Harbour, sufficient knots for every occasion and lots of triangular bandages.

Each Summer there was a week long camp. In 1957 this was located at Fittleworth, near Petworth in Sussex. This camp was 'basic', meaning we arrived at an open field with all our kit and equipment. Cooking, sleeping and toilet arrangements were all down to us, no brick build shower block on site but hand dug latrines. We had a daily rota of responsibilities for provisioning and cooking. Fetching milk from the farm house about half a mile away was no chore when it was rewarded with a bacon sandwich from the farmer's wife. On the other hand twenty four scouts do need quite a lot of water each day so water carrying was more of a chore but the stand pipe was only in the next field. One small regret was that the field with the stand pipe in was designated for use by Girl Guides - it was unoccupied during our stay but began to fill up as we were departing, perhaps they had been warned!

In addition to the annual camp we did a number of expeditions ranging from day hikes to weekend camps. One particular event which has stuck in my memory was a weekend in the New Forest. This was a Hampshire county scouts competition part of which was an all night trek through the forest meeting various challenges/tests on the way. At least you met them if you were on the correct route! Diagnosing and treating a 'badly injured' chap by torchlight and being marked for it, starting a fire without matches and being timed on the task and getting one of our team who was deemed to have become a 'casualty' back to base were all part of the night game. Our patrol, which had been split into two groups, did very well finishing second or third overall.

Being a member of the scouts taught me a lot. One thing I'd love to be able to forget was a 'thing' called twist. The idea was to turn rather inedible flour into a delicious nourishing food. The plain flour was mixed with a little water and some salt to make a stiff dough. It was then rolled out sausage like and twisted (hence its name) round a green stick. Then it was held over a fire or hot embers to cook. From raw to burnt it remained inedible. Why can't I forget it?

In inter-troop competitions both within Portsmouth and including Hampshire as a whole, the troop seemed able to hold its own usually finishing near or at the top. Although, much to my embarrassment, I remember one particular swimming gala when I was swimming the 100 or 200 Breaststroke. At the first turn I was in the lead and perhaps the excitement got to me because I swam the next length in Front Crawl. It wasn't the kind of 'cheating' one could hide and needless to say I was disqualified from the race.

I would like to add to Tony Riley's recollections of the Scout Troop. I was a founding member in 1956. The founder and Skip was 'Percy' Pallant, Biology master. I believe that his first name was David, rather than Dennis, as Tony recalls. However, he is definitely the 'DP' who wrote the Secundrian articles. I was founding Patrol Leader of Kestrel patrol, and other members included Doug Coombes, Doug Pearce and Bob Aldred. One amusing thing occurred in the founding. The choice of scarf colour (half amber, half black) was obvious, but this was not available in the catalogue of scout gear - so it may have been unique at that time. Founders had to find a buddy,, and buy one of each colour between them. My mother, who was a seamstress cut them in half and made up the scarves prior to our first meeting. 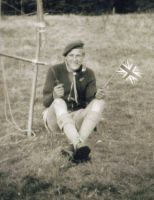 Senior Troop joker about 1956. Can anyone supply a name please? 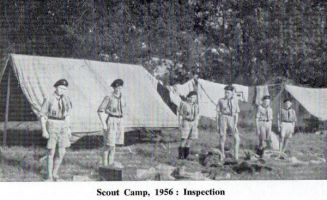 Sunrise on the last day of camp. about 1956. Mick Coombes raises the flag. 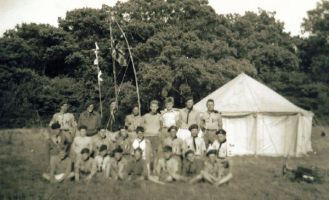 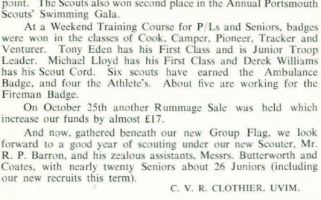 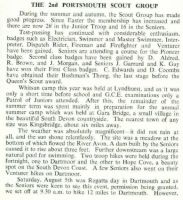 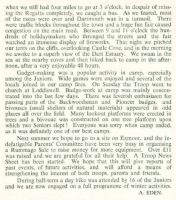 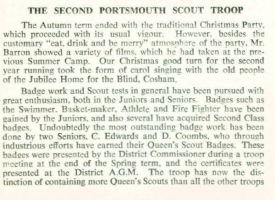